Skip to content
Home > Alcoholism > What Is The Difference Between Al-Anon From Alateen?

What Is The Difference Between Al-Anon From Alateen?

If you live with family members suffering from alcohol addiction, life is especially hard. Your relationship with your loved ones may even be your number one source of stress at home. For people with alcohol use disorder, their behavior patterns are not consistent. When they’re sober, they may be the nicest of people. But when they’re under the influence of alcohol, they can turn into aggressive, abusive, sometimes even violent versions of themselves.

These living situations are particularly damaging to younger kids and teens. Usually, one or both of their parents are the ones suffering from alcoholism. Kids may find it very hard to trust and love their parents who are under the control  of alcohol. They may even encounter a lot of childhood traumas from their parents’ misbehavior.

If the parents do not wish to seek help, the kids often feel helpless to improve their situations. That’s where a support group called Alateen comes in. Alateen is a special group under Al-Anon, which is a mutual support group for the families of people with substance abuse problems. Alateen is specifically for teenagers who are in the same sitiuation. In these groups, teens meet with fellow teens whose lives have been affected by someone else’s drinking problems.

If you’d like to know more about Alateen, here are some important things to know.

Alateen operates under Al-Anon, and it caters to the younger members of the groups. They are usually teenagers who live with relatives at home having alcohol use disorder. Most of the time, it’s their parents who have alcohol addiction, though it could also be other close relatives.

Alateen makes use of the same 12 steps used by Al-Anon and Alcoholics Anonymous (AA). Here are those steps:

What happens in an Alateen meeting? 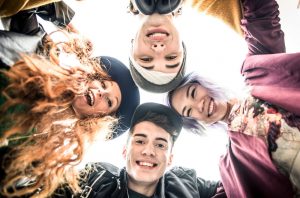 Members can also ask each other questions and learn from each other. Of course, they can also encourage one another, as everyone is going through a similar struggle.

Facilitators let each member understand the purpose of Alateen. Also, they walk them through the 12 steps, what they’re all about, and how they can help them cope with their situations.

What do teens commonly learn in Alateen? 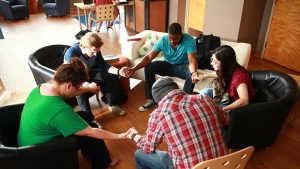 They’re also taught that compulsive drinking is a family disease, as it affects all members of the family emotionally, and sometimes, physically.

One essential thing that teens will learn is they are not the cause of anyone’s drinking problems. Often, many teens who have parents abusing alcohol blame themselves for their parents’ drinking. But this is not true, and Alateen reinforces this idea among its members.

Teens also learn the value of personal responsibility. In other words, they’re taught that they can’t do much about other people’s behavior, but they can control their own. With that, the teens can change how they respond to the situation at home.

Over the course of Alateen meetings, teens will realize they can keep developing themselves and unlocking their potentials no matter what happens at home. Their parents or loved ones should not prevent them from realizing those dreams.

Maintaining a good relationship with a parent under the control of alcohol is nearly impossible. Despite that, teens also learn that they can keep loving their parents while detaching themselves from their drinking problems. In other words, the parents’ alcoholism is not the teens’ problem to solve. With that mindset, teens would have a lot less stress living with their parents.

Should I go to Alateen?

If you’re still figuring out whether Alateen is right for you or not, answer these 20 questions:

If you answered “Yes” to any of them, you could benefit a lot from Alateen.